Protection against moisture damage is a matter of course in pipelines, installations, equipment and technical facilities. It ensures a high level of operational readiness and helps avoid high costs due to moisture-related renovation work as well as production downtimes. In the storage and archive area, dehumidifiers protect valuable goods from the expensive consequences of all moisture damage, and in extreme cases from their destruction.

Dehumidifiers are used to prevent or minimise the diffusion of water vapour through a building’s structural components and thus protect them from destruction in the long term. This prevents high follow-up costs for building renovation. Condensation on walkways leads to an increased risk of accidents and favours germ formation. Dehumidifiers are used here to maintain safe and hygienic conditions. 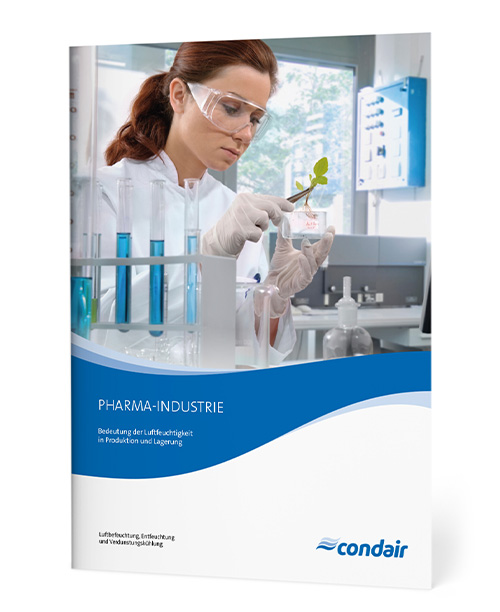 Air dehumidification
in the pharmaceutical industry 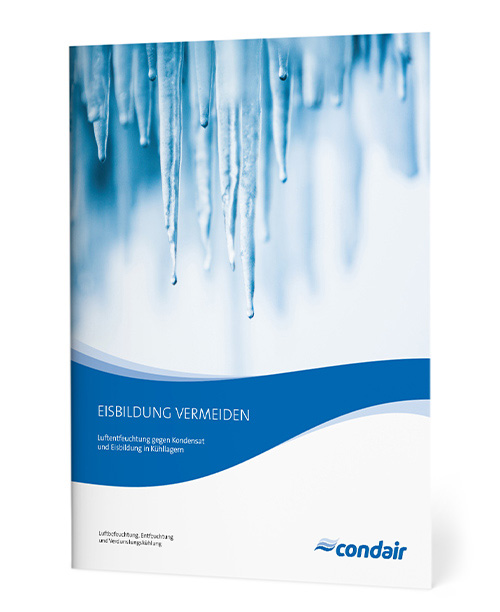 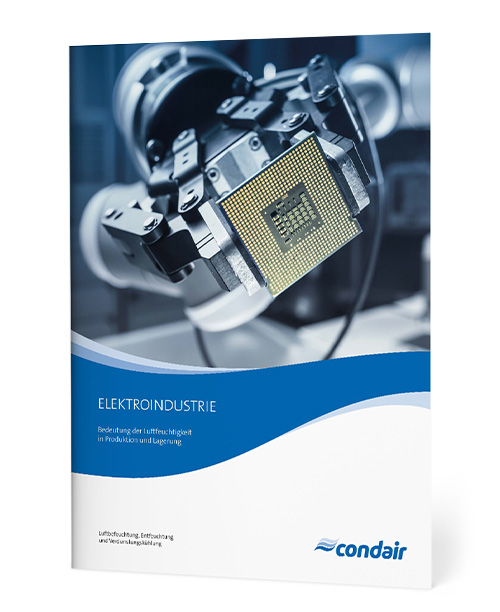 Air dehumidification
in the electrical industry 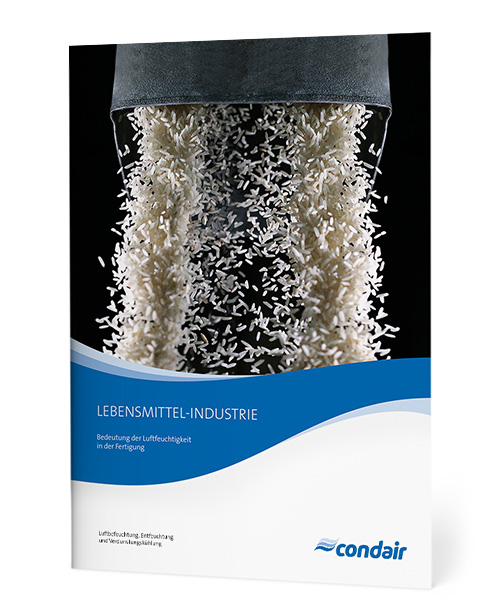 Air dehumidification
in the food industry

Air dehumidification
in the beverage industry

Dehumidification for
Protection against rust and corrosion

Dehumidification for
Assurance of production quality

Dehumidification for
Avoidance of clumping

Dehumidification for
Avoidance of mold

Drying by sorption:
Adsorption of the water vapour contained in the humid air on hygroscopic surfaces (silica gel rotor). This brochure deals exclusively with dehumidification and drying solutions for stand-alone units. Therefore, dehumidification via cold water-fed surface coolers, as used in AHU systems, is not mentioned again.

Air dehumidification by condensation:
The humid air is cooled below the dew point by passing the air flow over the cold surface of a heat exchanger (evaporator of a refrigeration circuit).

The following graph illustrates the operating characteristics and recommended use of the two systems. 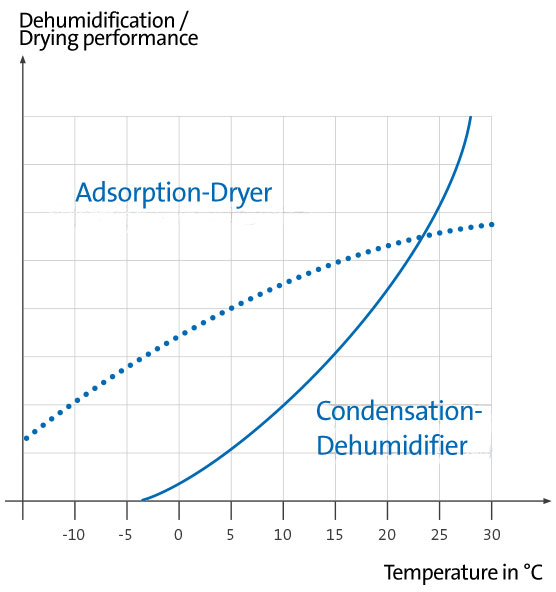 The hygroscopic material absorbs moisture and thus leads to a drying of the air flow. This part of the process is called the adsorption process. In order to expel the moisture accumulated in it from the sorbent, the adsorbent is then passed through with hot air in the opposite direction, whereby the hot air flow absorbs the water vapour bound in the adsorbent. Thus, desorption takes place, the corresponding process is called regeneration.

In an adsorption dryer, the sorption material usually consists of a highly hygroscopic silica gel, which is firmly embedded in a slowly rotating rotor that rotates continuously between two separate, counter-rotating air streams. The humid air stream is dried in the adsorption section of the rotor. In the regeneration section, the moisture stored in the sorption material is expelled and reabsorbed by the hot air stream. Since the functional principle is not based on condensation, but instead on sorption, i.e. a largely temperature-independent process, adsorption dryers are particularly recommended at low temperatures. In addition, adsorption dryers can also be used to achieve particularly low humidity values, as required in the pharmaceutical industry, for example.

> to the product page: Adsorption drying

DC-series Condair industrial condensing dehumidifiers are used in a wide range of applications in industry, trade and warehouses. The air dehumidification operation is based on a refrigeration process. The refrigeration machine generates a low temperature, which condenses the water vapour from the air, thereby dehumidifying the air.

The Condair condensing dehumidifiers are versatile and customisable. Even the ten standard versions cover a wide range of applications — with dehumidification capacities from 75 to 930 l/24 h at air volume flows from 800 to 8,500 m³/h. Free-standing installation or mobile use are possible, as is connection to an air duct network for optimal distribution of the dried air in the room. This means that the humidity in even very large buildings can be regulated using just one or a few units. Unit designs and series are also available for wall, rear wall and ceiling mounting as well as with external heat dissipation and for low temperatures.

> to the product page: Condensation dehumidifier

Give us a call

For functional reliability and energy efficiency, professional planning is indispensable. We will be happy to assist you as early as the planning phase. 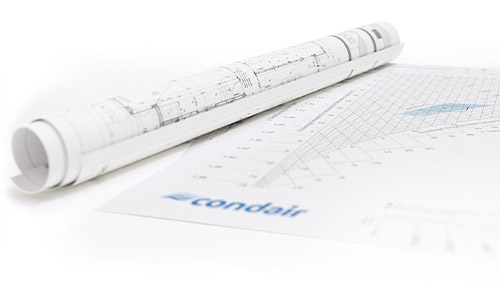 For functional reliability and energy efficiency, professional planning is indispensable. We will be happy to assist you as early as the planning phase.

Give us a call