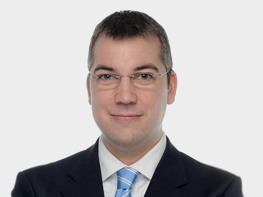 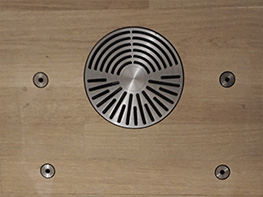 Every single one of the 2,100 seats is supplied with draft-free incoming air during a concert via a combined swirl / displacement diffuser. 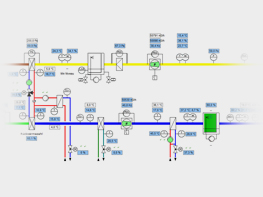 Operating states of an air conditioning unit for supply air conditioning in winter operation. The outside air drawn in is in the loop system preheated and heated with the reheater to the required humidifier inlet temperature. The setpoints for temperature and Humidity is determined from an enthalpy control. In the Condair hybrid air humidifier, the supply air is then adjusted to the required level absolute humidity humidified. 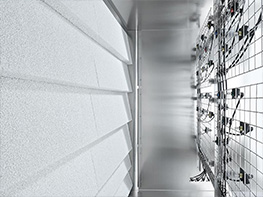 Inside view of a Hybrid Humidifier
Condair DL


Only the best air conditioning for superb concert experiences

Optimum Humidity for the Grand Concert Hall at Elbphilharmonie Hamburg

1. Introduction
After a construction period lasting around ten years and a total investment totalling over 800 million euros, the Elbphilharmonie Hamburg was officially opened in January 2017. A new landmark of the Hanseatic city located on the former Kaiserspeicher A, the 110-metre-high spectacular building with 1,100 double glass elements combines three concert halls, a hotel, 45 luxury apartments, gastronomy, a public plaza with panoramic views and a multi-storey car park. The following article deals specifically with the air-conditioning and air humidification of the Elbphilharmonie’s Grand Concert Hall (see Fig. 1). A clear goal was set for the Elbphilharmonie (see image 2): it was to construct a concert hall that would be among the world’s best from the very first note played by an orchestra. The huge overall project included over 100 AHUs, over 1,900 fire dampers and 425 individual room controls, and right at the very centre, the 25 m high Grand Concert Hall.

For soundproofing reasons, the 12,500-tonne Grand Hall is mounted on 362 spring assemblies and therefore acoustically decoupled from the rest of the building. The Grand Hall can seat an audience of 2,100, spread over several terraces around the central stage. Thus, all audience members are within 30 metres of the conductor. To achieve a perfect sound experience in the Grand Hall, the Swiss architectural firm Herzog & de Meuron Architekten and the acoustician Yasuhisa Toyota developed a unique wall and ceiling structure especially for the Elbphilharmonie: 10,000 individually milled gypsum fibre boards with a total area of 6,000 m² are arranged in such a way that they specifically reflect and scatter the sound in the huge hall. A special reflector under the hall ceiling serves as a central lighting fixture, while also ensuring that the sound is optimally distributed on the stage..

2. Ventilation and air-conditioning systems
The ventilation and air-conditioning systems for the Grand Hall must fulfil two essential tasks:
Incorporating these requirements into the planning was entrusted to the specialist engineers of the m+p Group. Following very extensive preliminary investigations and lab measurements of the acoustics, ventilation and air conditioning as well as the indoor air flow of the Grand Hall, the operators of the Elbphilharmonie decided on the following solutions: To ensure the best possible thermal microclimate and good air quality for each visitor, each of the 2,100 seats in the Grand Hall (see Fig. 3) is fitted with a combined displacement/swirl diffuser. The supply air is blown in from each of these diffusers in such a way that no draughts can occur among the visitors. The stage area is air-conditioned with displacement air, which is blown out from the rear stage areas towards the stage with low momentum.

These tasks are completed by two identical central air-conditioning units, conditioning a nominal outdoor air volume flow of 65,000 m³/h each all year round. This ensures that the supply air always enters the Grand Hall at a target temperature of about 20 to 21°C and a target relative humidity of about 40–50%. These supply air conditions apply to both displacement ventilation (stage) and displacement ventilation/swirl ventilation (visitor areas). Due to the thermal loads occurring during a concert, the exhaust air taken from the upper area of the hall has a temperature of about 25 to 27°C (during winter and summer, respectively). For concert rehearsals without visitors, the AHU can be set to a partial load condition, in which only the stage area and the orchestra stalls are supplied with air.

m+p carried out the extensive measurement procedures for the expert acceptance during three concert rehearsals before the official opening. The results were also deployed to come up with optimisations and adjustments in the operating modes of the air-conditioning systems, which also led to the ultimately successful acceptance of the high demands on comfort, air quality and humidity. All AHUs in the concert areas have to operate inaudibly. For this purpose, in addition to elaborate sound insulation measures in the air-conditioning units and on the air diffusers, all air ducts were also extremely sound-proofed (double shell with internal insulating mass). The systems are controlled by sensors for temperatures, humidity and air quality, which are positioned at various points in the Grand Hall and connected to a comprehensive building automation system.

2.1 Air conditioning
The following components, among others, are used in the AHUs to reprocess the outside air into supply air:
Fig. 2 shows an example of the operating state of an AHU in winter mode. The cold outside air which is drawn in (0°C) is firstly preheated in the AHU in the CCS, then reheated to a temperature of about 37°C. However, this heating causes the relative humidity of the air to drop to values below 10%, which are impermissible. Thus, it has to be humidified in the Condair Dual hybrid humidifiers to about 60% relative humidity, amounting to about 6.3 g of water per kg of air. At a nominal outdoor air volume flow of about 78,000 kg/h per AHU at concerts, this results in a humidification capacity of about 490 kg of water per hour. The heating of the fresh air with an output of over 1 MW per AHU is carried out in the multi-functional circuit system and in the reheater partly from the heat of the extract air (heating to around 25°C) and mainly with district heating.

In summer operation when outside temperatures are warm, cooling and, if necessary, dehumidification of the outside air takes place in two ways: First, the exhaust air from the Grand Hall (27°C) is precooled in an indirect evaporative cooling system and thus drops to a temperature of about 20°C. This corresponds to a cooling capacity of about 550 kW in nominal air operation. Secondly, the air in the AHU cooler is cooled down to the temperature calculated from the enthalpy control, which is required for the necessary dehumidification (maximum cooling capacity 480 kW). Finally, the air is heated to the required supply air temperature in the reheater. The cooling capacity comes from two water-cooled chilling units (using water from the local Elbe river or well water from two groundwater wells).

2.2 The Condair Dual hybrid humidifiers
The Elbphilharmonie project uses a total of eight Condair Dual hybrid humidifiers (see Fig. 5). The units work, as described, both for humidification for the Grand Hall and in the AHUs for the Small Hall and the associated foyers, the rehearsal rooms and the backstage/administration areas, and have nominal humidification capacities of 90 to 550 kg of water per hour. The hygienically flawless humidifying water is generated with minimised energy demand using, among other systems, the Condair AT2 — a frequency-controlled reverse osmosis system with constant pressure control and a capacity of 1,250 litres of water per hour.

By combining the humidification methods of atomisation and evaporation, the Dual Hybrid humidifiers are able to work cost-effectively and, thanks to the “Hygiene Plus Concept”, stop the multiplication of germs preventively and effectively. The optimised molecular atomiser nozzles spray the evaporation ceramics completely without blind surfaces. This results in the optimal utilisation of the humidifying water and highly efficient humidification. Behind the humidifiers, there is aerosol-free and hygienically humidified breathing air.

With an installation depth of only 600 mm (minimum length), the Dual Hybrid humidifiers are significantly more compact than high-pressure humidifiers, which means that the AHU construction can be shorter.