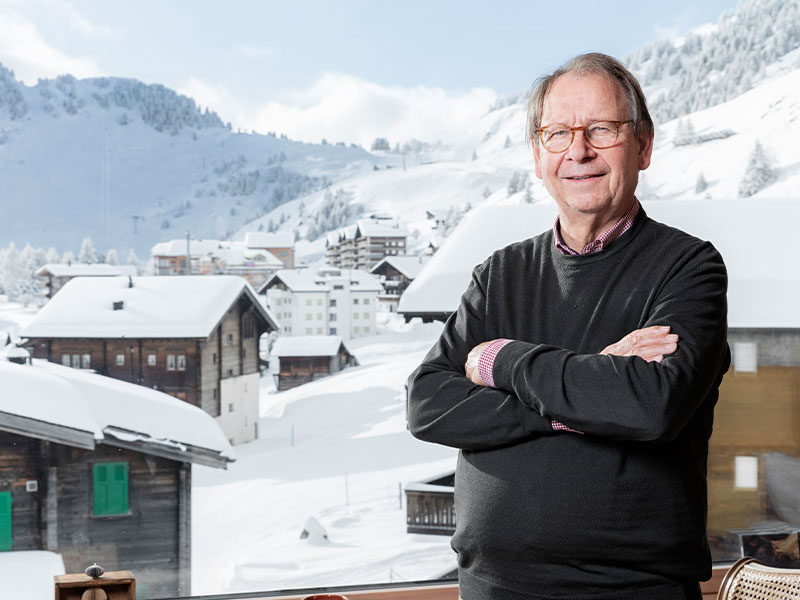 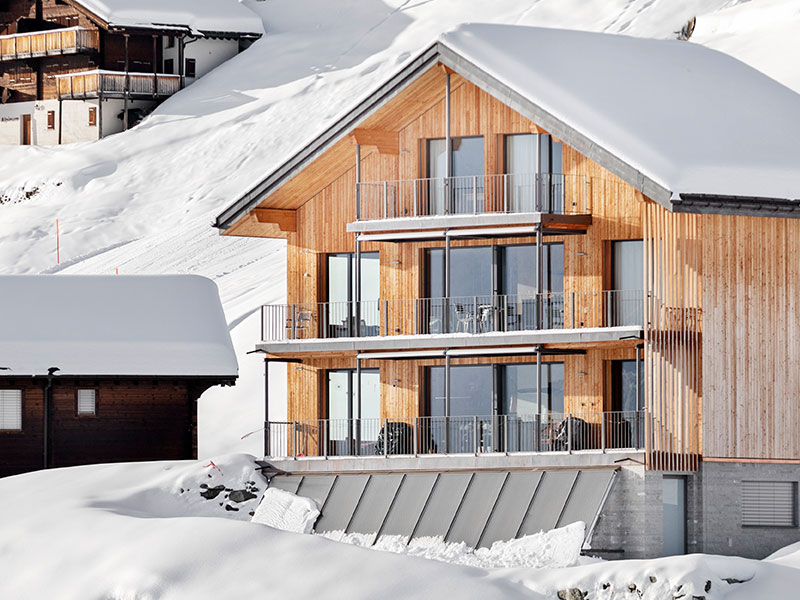 The core components of the solar thermal house and the heating system are the south-facing 28 m² solar collector system (below) and the large panoramic windows for passive solar gains in the cooler seasons. 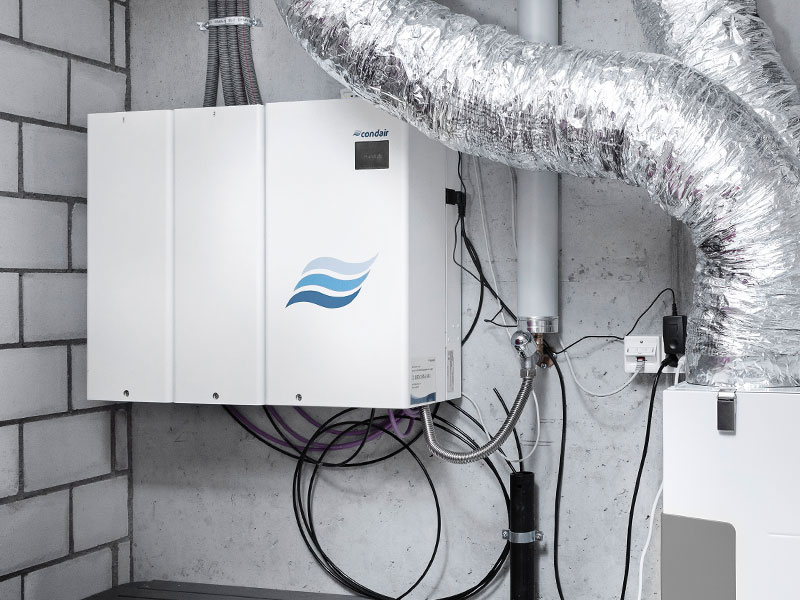 The base station of the Condair Humilife system for air humidification (left) and the mechanical ventilation system are located in the technical room in the basement of the building. 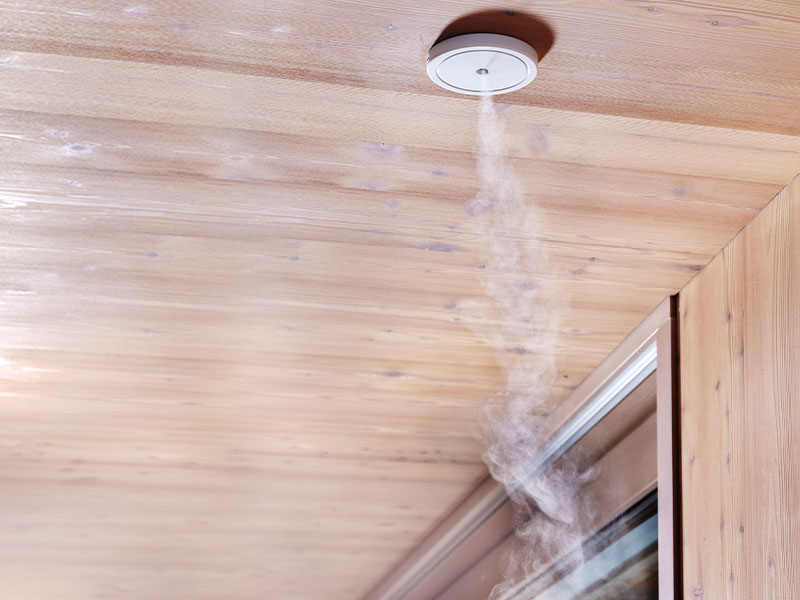 The slow outflow of the light water mist from the humidifier spot is clearly visible. The perforated air inlet for the ventilation system is located on the left of the wall. The incoming air flowing out there quickly absorbs the water mist and distributes it evenly in the room.

Healthy Humidity at Home in Riederalp in the Canton of Valais

At the end of his professional career, Swiss architect Joe A. Neidhart from Lucerne fulfilled a long-held wish: He built a duplex of about 250 m² in passive construction in Riederalp in the Canton of Valais (Switzerland) at an altitude of about 2,000 m, with a view over the Alps and of the Matterhorn, which he himself has been living in for 20 weeks a year ever since. Due to the altitude with very low winter temperatures combined with low humidity, Neidhart opted for a sustainable 100% solar thermal house for heating and domestic hot water and for a new, innovative system for controlled indoor air humidification.


Optimal solar architecture is the foundation

The house in Riederalp was completed in 2016. The effort for the construction was enormous, because construction is only possible there from June to November. Architect Neidhart paid special attention to the heat supply through solar thermal energy. What distinguishes the concept of maximum solar architecture in his house?

In total, three quarters of the heat for heating the house and preparing drinking water comes from the solar collectors and one quarter from passive solar energy during annual operation. Shade for the summer is ensured by balconies at the front (solar architecture). The effort and expense paid off! The unobstructed view of the Alps and the Matterhorn in the middle of a popular skiing and hiking area is spectacular. Since moving in, a doctor, who is also retired, has been living in the lower apartment on the ground floor. He, too, appreciates the indoor humidification system, especially because of his many years of experience with patients due to excessively dry indoor air.


Transporting a prefabricated timberframe structure on a car-free plateau

Except for the concrete basement, the entire passive building is made of wood and has very good 25 cm thick thermal insulation. The timberframe construction was fully prefabricated divided into elements in the Canton of Lucerne before being loaded onto trucks. Instead of driving to the valley station of the Riederalp railway, the six trailers (carrying 10 t each) were brought directly to the construction site by the local forwarding company, then offloaded sequentially in accordance with their assembly positions. The shell was therefore already in place after five working days. Since Riederalp is car-free, however, all the remaining building materials had to be transported laboriously from the valley station to the plateau and the site by large cable car (maximum capacity around 6 t).

Sufficient basic ventilation in the building is ensured by means of a central ventilation system with an air capacity of 500 m³/h. The heat requirement is further reduced by the highly efficient heat recovery in the ventilation unit. Indoor humidification as a further structural detail was specified shortly before the start of construction. Due to the special location at an altitude of around 2,000 m, a permanent indoor humidity of at least 40% also has to be automatically ensured while the house is unoccupied so that the following conditions are met:

Why is “indoor humidification” so important?

If the air is too dry, the skin becomes flaky and cracked, the mucous membranes of the nose and throat, as well as the eyes, dry out and become irritated. This makes us feel uncomfortable, the ability to concentrate is impacted and we are more susceptible to respiratory diseases. In addition, recent studies from Yale University have shown that insufficient indoor air humidity significantly increases the spread of flu viruses and thus the risk of falling ill. Very low indoor air humidity occurs when dry outside air flows into warm rooms through ventilation systems or open windows without regulated humidification during cool seasons. When rooms are ventilated like this, relative humidities of significantly below 20% then frequently occur, triggering the negative symptoms described above. From a medical viewpoint, at a indoor air temperature of 20 to 24°C, a relative humidity of the indoor air of between about 40 and 60% is considered to be the ideal range in terms of both health and comfort /1/. These problems are solved in non-residential buildings through the controlled humidification of the outdoor air in central ventilation systems. The cool, dry air drawn in from the outside is converted into supply air through intensive humidification with water vapour or finely atomised water droplets. Thus, the desired, comfortable and health-promoting indoor humidity is achieved in the rooms to which it is supplied. The situation is somewhat more difficult in most residential buildings. If the house is equipped with a central system for controlled mechanical ventilation, the use of the proven Humilife MD diffusion humidification system from Condair GmbH, Garching, for example, is recommended for sufficient air humidification.

The new HumiLife system — the flexible room solution, which Neidhart also chose for his house, is more powerful and more individually operable. The central components of this system are humidifier spots that are installed on the ceiling or wall in the rooms to be humidified. A high-precision sensor continuously measures the indoor humidity and controls the humidification capacity of the spots in such a way that the desired humidity, which can be individually set for each room, is kept constant. Safe operation and maximum ease of use are enabled through cloud-based monitoring and room-by-room monitoring and control of indoor humidity are possible via smartphone app. The spots with diameters of only 11.5 cm (including design cover) resemble the size of LED spots and can thus be discreetly integrated into any room layout. The spots obtain their humidifying water via thin water pipes (Ø 9 mm) from the base station. The water is treated centrally in the base station for the entire system in order to allow for optimum hygiene. The continuous disinfection of the humidifying water is ensured by means of an integrated UV lamp. In addition, there is constant conductivity monitoring of the water and a daily, automatically triggered system flush. A HumiLife system can comprise and control up to 20 humidifier spots. The capacity per spot is 200 g/h, which is sufficient to humidify an area of up to about 50 m². Humidification is achieved by introducing very finely atomised water from the spots into the room, whereby the water mist evaporates immediately into the indoor air and the combination is distributed evenly throughout the room.

The Condair HumiLife — the flexible room solution also works in the new building in Riederalp. A total of ten humidifier spots are used here: Two in the basement, three each on the first and second floors and two more in the attic. The living, dining and sleeping rooms, each with an area of around 15 to 50 m², are humidified. The HumiLife base station is located in the technical room in the basement. A total of about 110 m of thin water pipes were laid for the connections to the spots. The installations in the rooms were carried out in the wooden ceilings as well as in the wooden walls. After the entire system was installed, an extensive technical acceptance, including a test of the cloud-based monitoring and the system control via smartphone app, took place. 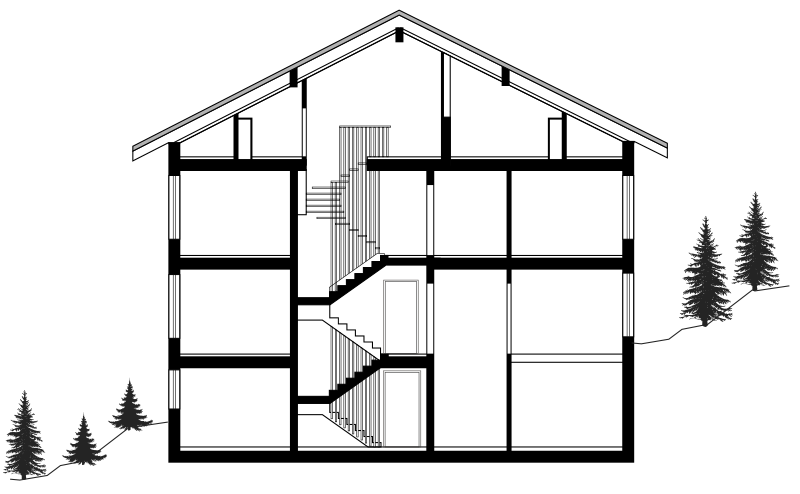 Architect Joe Neidhart:
“For our house in Riederalp, indoor humidification in the cool, dry seasons is very important for various reasons. The Humilife humidification system and its performance and possibilities fully convinced me.”
Client Q&A
How did you come to build this rather unconventional timber house with 100% solar thermal and automatic humidification?

Neidhart:
I first came in contact with the principles of solar architecture in 1978 during my postgraduate studies at MIT in Cambridge (USA), where the first “solar experimental house” was in the process of being built on campus. At that time, as a young architect, I learned of the importance of holistically combining nature, climate, energy, well-being and health with technical building skills.

What is your basic position on the subject of indoor humidification — even after the many years you have been working as an architect?

Neidhart:
In my profession as an architect, despite many projects for hospital buildings, offices, schools and hotels, I only recognised the problem of insufficient indoor air humidity in apartment construction in about 2009, when I was planning my house at an altitude of about 2,000 metres. That was when I realised that this altitude’s very dry outside air would damage a wooden building, the parquet floors, but above all us residents and the piano in the long term. I was aware of ventilation and humidification requirements for houses from my work, but in apartment construction this was still rather foreign to me. Through the MINERGIE low-energy building standard — for my house also — I gradually became more aware of this challenge.

Why did you choose this extensive air humidification set-up for your house in Riederalp?

Neidhart:
I looked for the best possible solution over the course of several years — which I was fortunate to able to do, since ventilation and humidification can be critical partners from a hygienic viewpoint. I was advised to air-condition the building or to ventilate and humidify the apartments with individual units. Finally, I discovered the Condair HumiLife system, which was also developed based on the findings of the Swiss doctor Dr. Walter Hugentobler. I knew then: This solution minimises my concerns and uncertainties — I’ll take a chance on it!

How has your experience with the humidification system been so far?

Neidhart:
I planned the supply air outlets of the ventilation system as wall outlets in the immediate vicinity of the humidifier spots, which results in an optimal distribution of the humid air in the rooms. This has worked smoothly right from the very start to this day. I am very satisfied.