The invisible risk of infection
in hospitals

The invisible risk of infection in hospitals

In the US and Europe, errors during in-patient medical care is the 6th leading cause of death (1). A significant portion of this terrible statistic are deaths due to new infections, called nosocomial or healthcare-associated infections (HAIs), that patients acquire while in the hospital. At least 10% of all patients who enter an inpatient healthcare facility for treatment will develop a HAI (2). Tragically, in the US alone, the number of deaths from these infections is over 100,000 annually. What are the environmental factors behind this situation and what more can we do to control the epidemic?

Patient outcomes determined from de-identified records were related to room conditions. Multivariate statistical analysis with linear regression was run to evaluate correlation between indoor measurements and new patient infections (HAIs). HAIs as shown below were found. 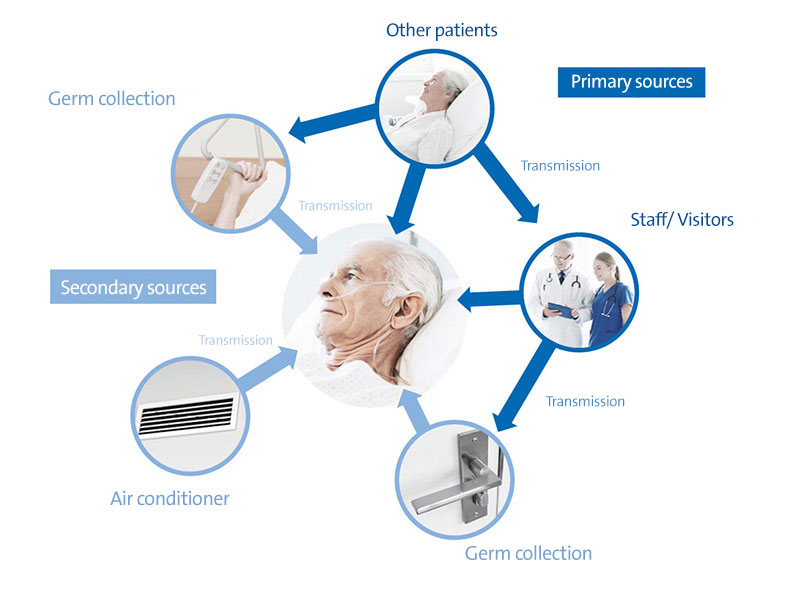 Conclusion
Humidification offers an effective yet underutilized preventive measure against healthcare associated infections caused by both bacterial and viral infections.
RH from 40 - 60% may provide a safer indoor environment for patients.

Today’s hospital infection control protocols focus largely on hand, instrument and surface hygiene, as well as on cough etiquette and facial masks. While these strategies target the interruption of transmission through contact and short-distance, large-droplet spray, they do not immobilize the tiny, aerosolized droplets which can spread infectious microorganisms over significant distances and for extended periods through the air.

While the magnitude of airborne droplet transmission continues to generate disagreement, epidemiologists do concur that despite robust surface hygiene interventions to control HAIs, the number of recorded cases has increased by 36% in the last 20 years and continues to grow every year. Outdoors, the risk of infection from contact with viral or bacterial pathogenes are extremely low since microbes are quickly diluted in the vast amount of air. Not so in closed spaces! Indoors, we are faced with a limited volume of air supply which we share amongst each other for our breathing needs. In hospitals, an increased risk of what is known as a nosocomial infection exists in many areas, ie. a disease originating in a hospital. These infections are commonly referred to as HAI’s or “Healthcare-Associated Infections”. In order to keep this risk of infection low, the ambient air has to be treated. Why?

Massive dissemination of germs due to dry air in which germs survive for longer and,
as a result of low aerosol size, float for long periods.

It is interesting to note that dry room air promotes the survival of viruses and bacteria - i.e. when the relative humidity falls below 40% - and when it is too humid (values over 60%). Infections of the respiratory tract generally increase in dry air. It has been scientifically proven that the optimal relative humidity (RH) for humans lies in a corridor between 40 and 60%. The room air must be conditioned in such a way that pathogens have practically no chance of survival. For this, the temperature and the setting of the relative humidity to values between 40 and 60% are decisive. Depending on the season, the outside air drawn in must be humidified or dehumidified in a central air conditioning system. How can this corridor be explained?

Too dry room air with a relative humidity of less than 40% allows the tiny droplets, which are contaminated with flu or cold viruses, to dry out. They then shrink to sizes down to 0.5 μm. At the same time, their salt concentration increases so much that a real crust forms around the aerosols in the dry atmosphere. This maximizes the viability of the germs inside the droplets and the ability of the droplets to float. They can "survive" up to 41 hours. So anyone who has a cold and coughs or sneezes in a too dry room creates a contaminated atmosphere that can last for almost 2 days.


The smaller, the deeper
We also know the relationship between the size of aerosols - the smallest particles that can float in the air - and their depth of penetration into our organism. Aerosols in the order of magnitude of 10-5 μm get into the nasopharynx, for example. The smaller they are, the deeper they penetrate. Aerosols that can get into the small alveoli are only 0.1 - 1 μm in size (so-called alveoli). In well-humidified rooms, the aerosol droplets with diameters of up to 100 μm remain comparatively large. Your ability to float is therefore severely restricted. They slowly sink to the ground and can no longer be breathed in.


The importance of infections during hospitalization / HAIs (Healthcare Associated Infections)

Scientific literature and patient experience make it clear that, despite current infection control practices, at least 5 out of every 100 inpatients contract a new infection or a hospital infection. These severe and largely preventable HAIs, which are extremely dangerous for patients' healing and survival, kill more people worldwide than AIDS, breast cancer and car accidents combined.

The surgeon and expert on patient safety, Dr. Atul Gawande, describes the victims of HAIs as "the 100,000 lives we can most easily save" because no new cure is necessary. We need to ask ourselves if there are any facility management strategies that we lack. A better understanding of how room conditions affect both the infectivity of microbes and the ability of patients to fight infection will help identify the best methods for reducing HAIs.


Correlation between the relative humidity and HAIs

Recently, a study by Dr. Stephanie Taylor in a newly built university hospital with approx. 250 beds in the USA. Over a period of 13 months, room temperature, absolute and relative humidity, illuminance (lux), room air changes, parts of the external ventilation and carbon dioxide content were measured hourly in 10 patient rooms. During the same period, electronic files from patients assigned to these rooms were analyzed for the presence of HAIs. When all the environmental measurements recorded and correlated with patient results were compared, it was found that the relative humidity in the room is the decisive factor with regard to the HAI rates. The results clearly show that the relative humidity in the patient room was inversely proportional to HAIs. In other words, as the relative humidity in the room increased, the HAI rate in patients decreased. 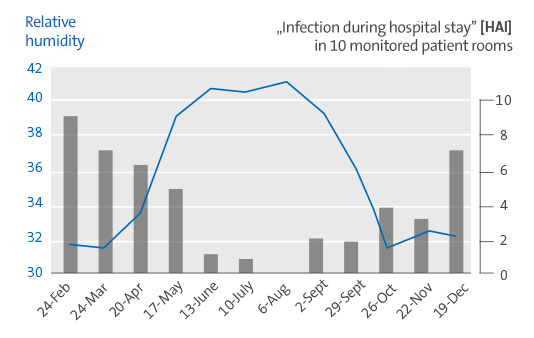 Massive savings
The study also produced astonishing results from a financial point of view. The financial impact of room humidification projected in this project has been calculated for the case that hospital infections are reduced by 20%. The breakeven point (avoided costs / investments) was already reached in the 1st quarter. The calculated net return in the first year was just under 7.3 million US dollars.


Technical implementation
But how can this be implemented technically? In hospitals, among all the available technical solutions for air humidification, only air humidification with steam comes into question. Electric steam humidifiers generate absolutely sterile room air humidity, as the water used is heated to boiling temperature, which no pathogens can withstand. Existing mineral-free or conventional tap water can be used for this. Another aspect that speaks in favor of air humidification with steam is the steam distribution networks already in place in hospitals, which are required for sterilization or cleaning purposes. Steam humidifiers can be integrated into any existing central air conditioning system or, in most cases, also retrofitted. They are easy to clean and maintain. For the even introduction and distribution of the steam in the air flow, it is particularly important that the humidification path is carried out correctly. It is made up of the fog zone and the subsequent expansion and mixing zone. If dimensioned correctly, condensation within the air ducts is excluded. In addition, then no water aerosols reach the filter.


Conclusion
A constant relative humidity between 40 and 60% prevents droplets from drying out and forming a salt cover. Viruses and germs are thus deprived of their basis of survival - they become inactive within a few minutes.
Comment from
Dr. med. Walter J. Hugentobler

This study highlights the possibilities of reducing airborne bacterial and viral infections in healthcare by maintaining optimal humidity. A relative humidity of 40 - 60% can offer the patient a safer room climate.

Not only will this improve patient care and health, but it will also reduce the cost of treating patients with preventable hospital infections.

The study deals with the direct and indirect effects of relative humidity on human health.
Read more

The aim of this study was to scientifically examine the effects of steam humidification on Sick Building Syndrome (SBS) and the perceived air quality...
Read more