Originaltitel: Criteria for Human Exposure to Humidity in Occupied Buildings

Originaltitel: Criteria for Human Exposure to Humidity in Occupied Buildings

The determination of an acceptable range of humidity is complicated by the conflicting effects of an increase or decrease in humidity levels on the speed of chemical interactions and growth of biological organisms and pathogens that may affect human health and comfort. Ideally, ventilative characteristics of offices and dwellings should strive for levels cf humidity that not only are perceived as comfortable but also minimize the growth of organisms and the speed of chemical processes that will cause discomfort and illness once they are present in S1Jf-ficient quantity.

A review of the relevant health literature suggests that the optimal conditions to minimize risks to human health occur in the narrow range between 40% and 60% relative humidity at normal room temperatures. Although this range is, much narrower than the current ASHRAE Standard, reducing the range of accet>t,able humidity would help alleviate many of the health and comfort problems in buildings, especially those that appear to plague modern, sealed office structures.

Some level of humidity is necessary to achieve conditions conducive to human health and comfort,_ Like temperature, but unlike most other indoor contaminants, levels of humidity that are either too high or too low may detract from human health and comfort. Low relative humidity causes dryness of the skin and mucous membranes, which may lead to chapping and irritation of the throat and other sensitive areas (Lubart 1962). High relative humidity prevents effective evaporative cooling of the body during exposure to high temperatures and may lead to heat exhaustion or heat stroke and possible death (Cole 1983).

In addition to the direct effects of either too little or too much humidity on building occupants, humidity has another, complex but nevertheless decisive, effect on health through interactions with biological pathogens and noxious chemical substances often found in the air of buildings and dispersed or enhanced tnrough ventilating, humidifying, and air-conditioning equipment. Many of these organisms and the products of a variety of chemical reactions cause discomfort and even illness. The rate of growth of these organisms and, in turn, the speed of chemical reactions, are very much determined by combinations of temperature and humidity. Ideally, ventilative characteristics of offices and dwellings should strive for levels of humidity (and temperature) that not only are perceived to be comfortable but also minimize the growth of organisms and the formation of chemicals that will cause discomfort and illness once they are present in sufficient quantity.

Here we review the health literature of relevant biological and chemical interactions in order to define an optimal range of humidity where overall health risks may be minimized. Humidity effects (within a normal in.door temperature range of 19°C to 27 °C) are reviewed for three groups of factors*. 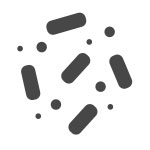 Biological Contaminants
The relative humidity cf the air as well as surface condensation provides a favorable medium for survival and growth of biological contaminants such as bacteria, viruses, fungi, and mites. 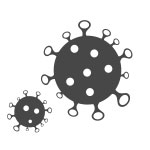 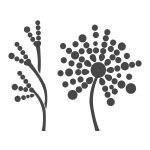 Fungi
One of the most important_ humidity-related indoor problems results from the proliferation of fungi in the interior of homes. Any wet organic material may support the growth of fungi. Damp walls, leather, cotton, paper, fireproofing materials, insulation, furniture stuffing, carpets, and food have all been shown to be sources of fungal contamination (NAS 1981).

The maximum growth of fungus occurs above 95% relative humidity and almost ceases below 80% (Moore-Landecker 1972). 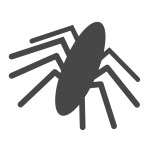 Mites
Murray and Zuk (1979) demonstrated a streng seasonal pattern between the abundance of hause dust mi tes, Dermatophagoides, and the relat i.ve humidi ty. No mites were found in winter if the relative humidity was below 50%. In other studies, live mites were found throughout the year, though there was a reduction in their number during the winter (Van Bronswijk 1973; Arlian et al. 1978). Korsgaard (1983) in a study of 50 Danish apartments found that lower relative humidity (below 38%) in winter reduced mite populations throughout the year.

Airborne pathogens causing respiratory problems
The interaction between relative humidity and biological contaminants that are either naturally or artificially dispersed through ventilating and air conditioning equipment (often with humidification) pr-imarily affects the incidence of respiratory infections and allergies. 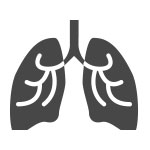 Respiratory Tract Infections
The incidence of acute respiratory illness among North Americans is estimated to be one infection per person per year, with a greater incidence and severity among children and the elderly (NCHS 1975; Hinkle and Murray 1981). Several epidemiological studies have found the incidence of respiratory infections to be lower among the occupants Öf buildings with mid-range humidity levels compared to the occupants of buildings with low humidity levels.

Gelperin (1973), Green (1975, 1979, 1982), Ritzel (1966), Sale {1972), and Serati and Wuthrich (1969) found a statistically signi,ficant reduction in respiratory infections, or absenteeism, among occupants of humidified buildings. One study (Green 1975) found a nonsignificant reduction in absenteeism among children attending a humidified school. Guberan (1978) and Sataloff and Menduke (1963) found an increase in absenteeism among people exposed to humidification (though the results were also not statistically significant). Therefore, the evidence tends to support the conclusion that the incidence of respiratory infections is reduced by an increase in humidity from low to mid-range (40-50%) levels.

The cause of the reduction in respiratory infections is not known.but is probably due to an increase in the settling rate of aerosols at higher humidity and/or a decrease in the survival of bacteria and viruses. For example, Sale (1972) found that the number of bacterial colonies growing on plates exposed to air in schools decreased from an average of 2,029.4 colonies per plate to 256,8 after an increase in humidity from 31 .4% to 51.4%. Other investigators believe that low humidity increases susceptibility to respiratory infections by drying the mucous membranes of the nose and throat. Mucus is thought to prevent infection by preventing contaminated aerosols from reaching the lungs (Goromosov 1968: Lubart 1962).

There appears to be a decreasing trend in respiratory infections as the humidity increases from 0 to 50%, Little information exists for relative humidities above 50%. 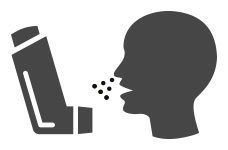 Allergic Rhinitis and Asthma
Both allergic rhinitis and asthma are sometiffies considered to be different manifestations of the same disease (Pedersen and Rung-Weeke 1983), The prevalence of both diseases in the population may be as high as 20% {Broder et al. 1962; Dodge and Burrows 1980; NIH 1976).

Fungi and insects such as house dust mites have been found to cause both allergic asthma and allergic rhinitis (Fink et al. 1971a; Fink et al. 1976; NIH 1976). The growth of these organisms is aided by high relative humidity. Fungi associated with allergic rhinitis and asthma are of the genera Alternaria, Cladosporium, Aspergillus, Mucor, Rhizopus, and Merulius (Gravesen 1979), Several fungal and bacterial species may also cause hypersensitivity pneumonitis, an allergic response of the lung in non-atopic individuals (Pepys 1977).

Physicians have long recognized the beneficial effect of high relative humidity in cases of asthma and allergies and have encouraged the use of vaporizers. The beneficial effect of humidification on allergies is believed to be partly attributable to the reduction of airborne dust at high humidity levels and also to a direct reduction in asthmatic lung obstruction (Sale 1971). Conversely, higher humidity level“s may increase the number of organisms such as fungi and house mites that may cause an asthma attack. Solomon (1974), in a study of the indoor environment of asthmatics, found that cool mist humidifiers installed on the advice of the physician were freguently contaminated by the fungi Rhodotorula, Penicillium, Aspergillus, and Oospora. This contamination could exacerbate the very symptoms humidification was expected to relieve.

An optimum zone appears to exist between 40% and 60% relative humidity where asthmatic ,reactions can be minimized. 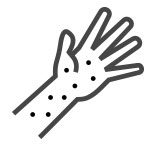 There is an increasing trend in chemical interactions above 30% relative humidity; however, the majority of problems occur above 50%.

Ozone Production
Low relative humidity enhances the formation of ozone indoors (Farrell et al. 1979; Mueller et al. 1973; Waldbott 1973). Ozone produces an irritating effect on the mucous membrane of the eyes, nose, throat, and respiratory tract. In addition, it is well known as a general catalyst for chemical interactions resulting in a large variety of irritants and toxic substances commonly referred to as „smog“ (Altshuller 1978).

Indoor smog, enhanced by ozone, could well be responsible for a large proportion of the symptoms conunonly associated with tight building syndrome or building illness occurring in office and commercial buildings (Sterling and Sterling 1983). Very high ozone levels, in combination with poorly ventilated combustion appliances, could result in similar occurrences of indoor smog in residences. 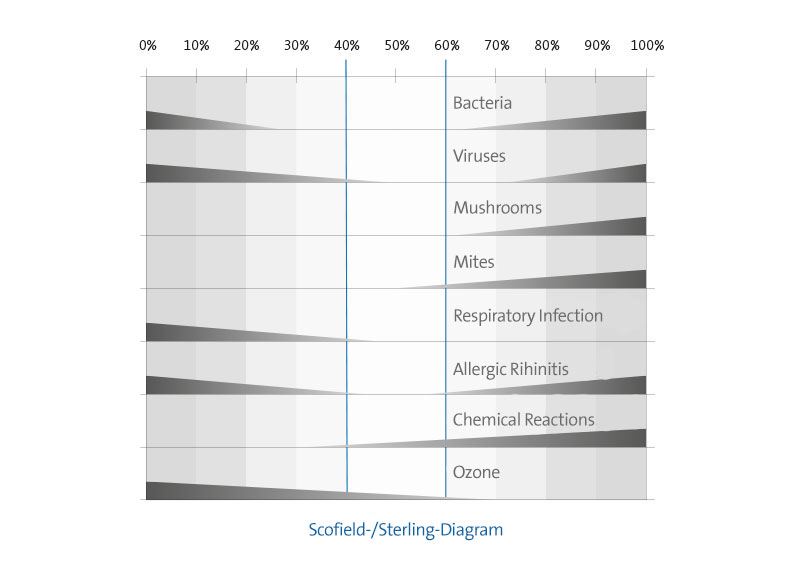 Unlike most gaseous and particulate contaminants that are primarily affected by indoor and outdoor sources and sinks, relative humidity is also a tunction of air temperature. In addition to the effect of temperature, the selection of the most desirable range of humidity is complicated by the conflicting effects of an increase or decrease in humidity levels. For example, increasing humidity may reduce the incidence of common respiratory infections and provide relief for asthmatics. On the other band, an increase in humidity may increase the prevalence of microorganisms that cause allergies. Criteria for indoor exposure must balance both effects.

The ideal humidity guideline should specify a relative humidity range that minimizes deleterious effects on human health and comfort as well as reduces, as much as possible, the speed of chemical reactions or the growth of biological contaminants (which will impact human health and comfort). Figure graphically summarizes the apparent association between relative humidity ranges and factors that affect health of oc.cupants at normal room temperatures. The figure is constructed as a bar graph relating relative humidity levels from 0% to 100% (shown along the horizontal axis) to (1) biological organisms (bacteria, viruses, fungi, and mites), (2) pathogens causing respiratory problems (respitatory infections, asthma, and allergies), and (3) chemical interactions and ozone production, The decreasing width of the bars represents decreasing effects.

The evidence suggests that the optimal conditions to enhance human health by minimizing the growth of biological organisms and the speed of chemical interactions occur in the narrow range between 40% and 60% relative humidity at normal room temperature. That narrow range is represented by the optimum zone in the shaded region of the graph. Although keeping indoor humidity levels within this region will minimize health problems, there is probably no level of humidity at which some biological or chemical factor that affects health negatively does not flourish. (Note that for many factprs, most prominently chemical interactions, effects are still shown within the optimum zone.)

ASHRAE Standards have long provided guidance for engineers on control of humidity to achieve comfortable conditions. Until 1981 (ASHRAE 1966), the acceptable range of allowable humidity was between 20% and 60%. However, in 1981 the .upper limi t of that range was expanded to 90% to permi t greater energy conservation (ASHRAE 1981), But conditions that impact health and comfort through the growth and accumulation of noxious organisms and chemicals suggest a reduction of the existing range of acceptable relative humidity to the region between 40% and 60%.

Although this range is much narrower than the current ASHRAE standard (and would, if adopted, increase building energy use), it would also help minimize many of the health and comfort problems in buildings, especially those that appear to plague the modern, sealed office structure.
* This review is based on a document with criteria on humidity and its impact on the occupants of buildings, which is issued for the Directorate for Environmental Health,
Health and Welfare in Canada (Theodor D, Sterling Ltd. 1984).
Comment from
Dr. med. Walter J. Hugentobler

The publication provides good evidence that the optimal indoor humidity for human health is 40-60% r. F. is. To date, the Sterling and Arundel publications are the only reviews based on interventional clinical studies (seven successful studies) that provide evidence of the preventive effects of humidification on respiratory infections and illness-related absences.

This publication preceded Arundel's publication a year later, which presented an even more in-depth analysis of the adverse and health benefits of humidity.

The study deals with the direct and indirect effects of relative humidity on human health.
Read more

The aim of this study was to scientifically examine the effects of steam humidification on Sick Building Syndrome (SBS) and the perceived air quality...
Read more